Spain has deep Roman Catholic roots, going back, legend tells us, to Christ´s apostle, St. James, Santiago.  The pilgrim passes through perhaps a half a dozen village each day, almost all dominated by an ancient stone and wooden church.  We often stop to sit in the cool, dark sanctuaries for a moment of contemplation and to experience the beauty and devotion  represented by centuries old statues and paintings of the saints and Holy Family.  We have occasionally attended services in churches sparsely attended, and mostly by women fifty years or older.  Many services have no priest, just women reciting the rosary.

The large cities along the Camino have great catherdrals, dating back to the 13th century.  They are extraordinary, beautiful, colossal monuments glorifying the Church.  Built in an era when peasants lived in small one storey houses, the only large buildings one might ever see would be the catherdral, the castle of an aristocrat, or the bishop´s palace.  In Astorga, the grand, gothic catherdral and bishop´s palace, designed by 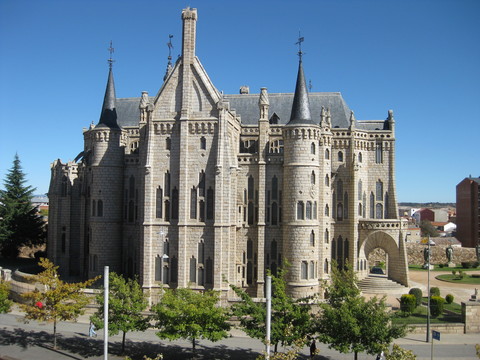 the genius, Antoni Gaudi, at the end of the 19th century, stand side-by-side.  The palace is now a museum, and a portion of the catherdral houses another museum.  Both contain church treasures, room after room of gold and silver chalices, four- foot high prossesional crosses intricately crafted of silver and gold, the robes for priests and bishops sewn with pearls and golden thread.

We hiked out of Astorga, climbing the foothills of Las Montanas de Leon, for 14 miles to the beautiful village of Robanal del Camino.  Its stone houses stretched along the hamlet´s two streets.  That evening we attended a service with other pilgrims in the small romanesque church, one small chamber formed by three semi-circular arches, with wooden pews.  Two elderly monks transported us to another realm with an hour of Gregorian chanting in Latin.

It was the day of a national holiday honoring Spain´s military.  We moved on to a more secular celebration at an albergue.  As we entered the courtyard, village ladies handed us cups of thick, rich chocolate to drink.  The place was packed with pilgrims and villagers.  Wine and beer was flowing.  A three piece band with a fiddle, 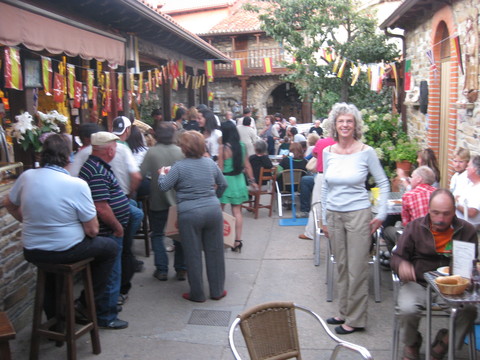 banjo, and drum struck up a tune and then played for three hours without pause, first Spanish love songs and then American folk music straight out of the Pete Seeger songbook.  A couple of two year old girls, one dressed as a princess, started a freestyle dance.  It wasn´t long before we all joined them.  Twenty something pilgrims and villagers were tossing back shots of a yellow brew that inspired them to spring and bound.  Then they placed their hands on the hips of the person in front of them and led us, dancing in a long line, joyously snaking through the bar and courtyard.  Later, we staggered to bed, sleeping off the evening´s religious experience, ready to continue our pilgrimage.