Leaving the plains of north-central Spain, the pilgrim climbs and decends through the mountains of eastern Leon and into Galicia.  As each day passes and the Atlantic Coast draws nearer,  the terrain becomes more lush and verdant.  Ascending out of Rabanal for 1,000 feet, we reached the highest peak on the Camino, Cruz de Ferr, at 4,938 feet.  The trail passes through dense forests of oak, eucalyptus, birch, chestnut, and pine. Climbing out of Villafranca, the trail ascends 1,200 feet, drops 1,000, and then climbs another 2,300 feet to OĆebreiro, entering Galicia, the final state on Camino Frances.

Small farms replace the large grain fields of the maseta, and the Camino passes through a dozen small villages each day. Barns and fields are alive with sheep, cattle, hogs, and chickens.  Farmers sheppard their flocks from field to barn and back through the villageś main cobblestone street while the chickens free range the town. 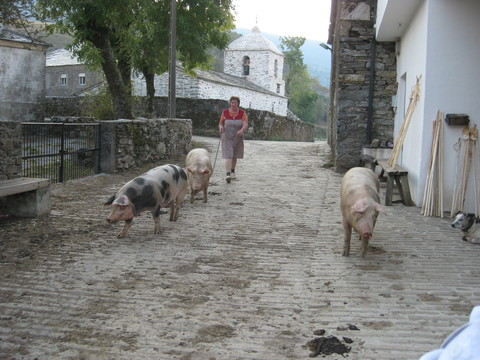 Small pastures are lined with stone walls, and virtually all structures are made of stone.  The roofs of houses and churches are now black  slate, a change from the red tile roofs since the start of the Camino.

Descending into the deep valley of Rio Oribio, we visited the colossal and magnificent Benedictine monastery of Samos, one of the oldest in Spain, dating back to the 6th century.  We toured the large cloisters and gardens, the ornate 18th century church, and a small shrine room housing St. Benedictś femur and a chalice with a thorn from Christś crown.  Today the massive monastery houses only 15 monks with just two novices trying to join the ranks.

We stay in lovely, modest pensiones and hostals in farming hamlets.  At night, pilgims gather in the one or two restaurants in the village to dine on Galician cuisine - fried octopus seasoned with paprika, fresh shrimp, pork, cheeses, pastries, and local wines. 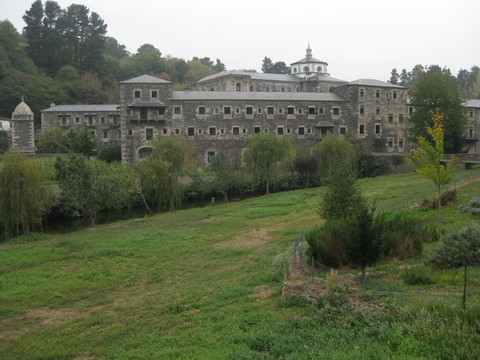 After 100 mles of hiking since Leon, Heidiś blisters could no longer be denied.  She had bandaged them and soldiered on, hoping they would cure themselves, but they persisted.  We decided to stop at a clinic in Triacastela.  After a 15 minute wait, the doctor poked her head out of her office, invited Heidi in, drained and treated the blisters, and wrote the names of the bandages and medicines Heidi would need.  They both emerged from the doctorś office laughing at the challenges of communicating with limited Spanish and English.  No charge, of course.  The American medical system has so much to learn.

Next, on to Santiago.