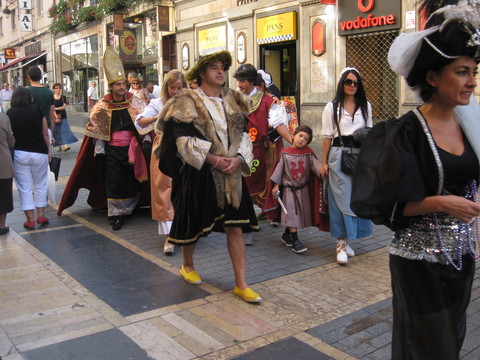 There were jugglers, tumblers, and drum and recorder bands performing for the thousands of people crowding the streets.

My wife, Heidi, arrived at midnight after a journey of four flights and 32 hours from our home in the San Francisco Bay Area.  After 22 days and 300 miles of hiking solo, she would join me to hike the rest of the Camino.  I waited for her in the small plaza across from our hotel.  It was still hopping with celebrants spilling out of the bars that surround the square.

Our hotel, Hostal San Martin, is an aged stone and wood stucture with a twelve foot high, heavy wooden door, undoubtedly older than any building still standing back in the Bay Area.  Inside, it was modern and comfortable.  It seemed a metaphor for Spain, a very modern country that has perserved its ancient architecture and heritage for tourists and its citizens to relish.

We stayed in Leon for three nights, giving Heidi a chance to adjust to the new time zone and for me to rest.  We explored the city, walking the banks of Rio Bernesga, and visiting the extraordinary and ornate gothic catherdral, 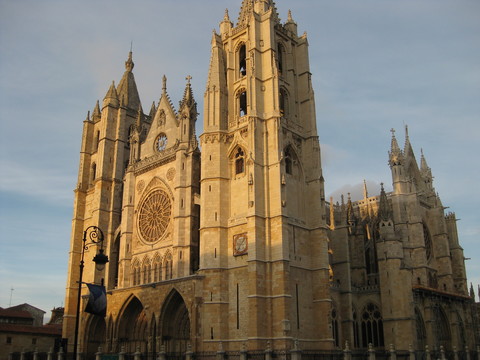 the fanciful Gaudi designed Casa de Botines, and the Convento de San Marcos - the former mother house of the order of the Knights of Santiago, dating back to the sixteenth century.  It is now a luxury hotel but preserved like an unguarded museum with a romanesque church, cloisters, gardens, and magnificent works of art.  We roamed its ancient corridors, opening doors and finding stone passageways and narrow stairways to explore, hoping we would remember how to find our way out.

At night, the people of Leon come to the old city to play.  We joined them at sidewalk tables of tapas bars and restaurants serving sumptous grilled trout, roast lamb, and local red wines.  Leon, with a population of 130,000 is the third largest city along Camino Frances after Pamplona and Burgos.  It is the last large city we will visit until we reach Santiago.  We departed rested and sated, eager to explore the mountains of Galicia and to hike the final 200 miles of el Camino de Santiago de Compostela.