The guidebooks warn of the fierce weather in Galicia.  Storms blow in from the Atlantic bringing wind, cold, rain, and snow.  But, the weather for us, in late October, is ideal for hiking - crisp, cool mornings; warm, sunny afternoons.  In fact, I had only taken my rain jacket out twice during the six week pilgrimage because of slight drizzle.  Now, with the short autumn days, the leaves of oaks, maples, and chestnuts are turning yellow and orange. 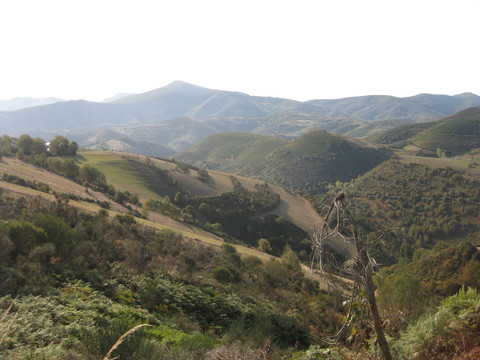 We hike on narrow trails cut deep through the dense woods, sometimes fifteen feet below the forest floor.  Walls along the paths may be constructed of ancient stones or they may be solid earth held in place by deep roots.  It seems the route has been worn down by the foootsteps of millions of pilgrims over 13 centuries, the boots of Roman legions before that, and the tracks of Celts going back to the iron age and the 8th century B.C.

Two days out from Santiago, it started to rain.  We welcomed it, enjoying a chance to wear our rain gear and hike in the wet woodlands, stopping in village cafes to warm up with hot chocolate.  Approaching Santiago on the final day, a rainbow appeared, ärco iris.¨

We entered Santiago, passed by dozens of aged churches, entered the old city, checked into a hotel, and visited the pilgrim office.  The officials inspected our ¨credential del peregrino,¨ the document that every pilgrim carries.  Hostals, albergues, cafes, bars, and churches along the route stamp the pilgrim´s passport.  This verifies that the pilgirm has made the journey.  We were issued a scroll, a compostela, written in Latin.  Our names - Adelaidem (Heidi) and Thomam.

There are several pilgrimage routes that all end in Santiago.  A pilgrim must hike the final 100km or bike the last 200 in order to receive the compostela.  The officials told us that it is now the slow season and only 150 pilgirms a day finish the journey.  During the summer, the number swells to 1,500.  Over the first ten months of 2011, 170,000 peregrinos completed their pilgrimage!

The next day we entered the grand catherdral for the pilgrims mass.  It was the most fun I have ever had in church.  The knave of the massive structure is formed by 14 five storey Romanesque arches, but the decor is very Baroque.  Brightly painted wooden carvings of angels, cherubs blowing trumpets, and warriors on charging steeds with lances raised, support organ pipes stretching 30 feet to the ceiling.  Behind the altar, 20 foot high angels, guilded in gold, hold up a platform with giant maidens and Roman soldiers.  St. James, Santiago, is shown in his many forms: a simple pilgrim, the Moor Slayer on horseback with sword raised, and in the center - seated on a throne bedecked with gold and jewels. 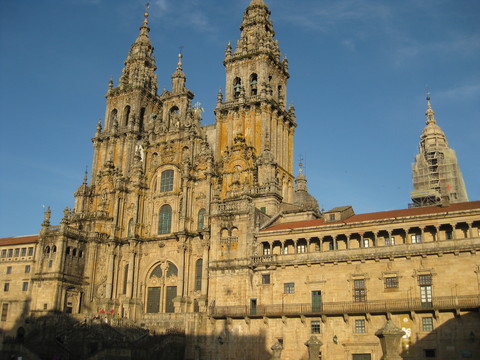 The bishop, wearing a miter, led the mass with a supporting cast of eight priest wearing white vestments and the red cross of Santiago.  A nun with the voice of an angel led us in song.

A giant incense burner, the botofumeiro, hung from a pulley at the ceiling by thick rope.  At the conclusion of the ceremony, a cluster of robed churchmen pulled on the rope in unison while one of their members gave it great shoves.  It swung back and forth across the long transept in a grand arc.  These guys have one the best jobs in Christendom.  The sweet smell of incense filled the catherdral.  Then, the pilgrims milled around greeting friends they made along the trail.

The Camino de Santiago de Compostela teaches many lessons.  This is a topic of intense interest for pilgrims along the trail.  One cannot walk the Camino and be unchanged.  I think I will be processing what I have learned for many months, but here are a few lessons.  Solitude, community, and empathy.  The pilgrim walks alone - long days for hundreds of miles at two miles an hour with endles hours of contemplation, but the shared experience and quest creates a deep community and caring for your fellow pilgrim.  There is great joy in the simplicity of the pilgrim´s life.  You are carrying all your possessions, and you don´t want to add any more.  So, the pilgrim is divorced from the market economy.  She is single-tasking, rising in the morning and walking with only a few decisions to make - where to spend the night and to eat.  There is clarity of the day´s purpose and accomplishment.  What a change from our modern lifestyle.  What a wonderful gift.