town to hill town savoring the Tuscan countryside at two miles an hour, exploring farmland and forest, walking the quiet streets of ancient villages, meeting the locals, and enjoying the famous wines and cuisine.

It was late October when my wife, Heidi, and I set out from the walled city of Buonconvento for five days of hiking, walking 4-6 hours a day.  Summer in Tuscany can be unbearably hot and crowded with tourists.  But, in the autumn, the hoards have departed; the weather is ideal for a long stroll. We were armed with only a map of Italy and a fantastic book, Walking and Eating in Tuscany and Umbria, by James Lasdun and Pia Davis.  It describes the trails, countryside, villages, cuisine, wines, and restaurants of a country the authors deeply love.  Unfortunately, it was last published in 2004 and sadly out of date.  Most of the restaurants have changed hands, landmark farms have changed names, and some trails are now blocked.

Yet, after moments of confusion, we were always able to find our way.  The book’s maps are useful.  Red and white trail markers of the CAI (Club Alpino Italiano) help.  Restaurants that we found after talking to our innkeepers or to locals and visitors over a glass of wine, never disappointed. 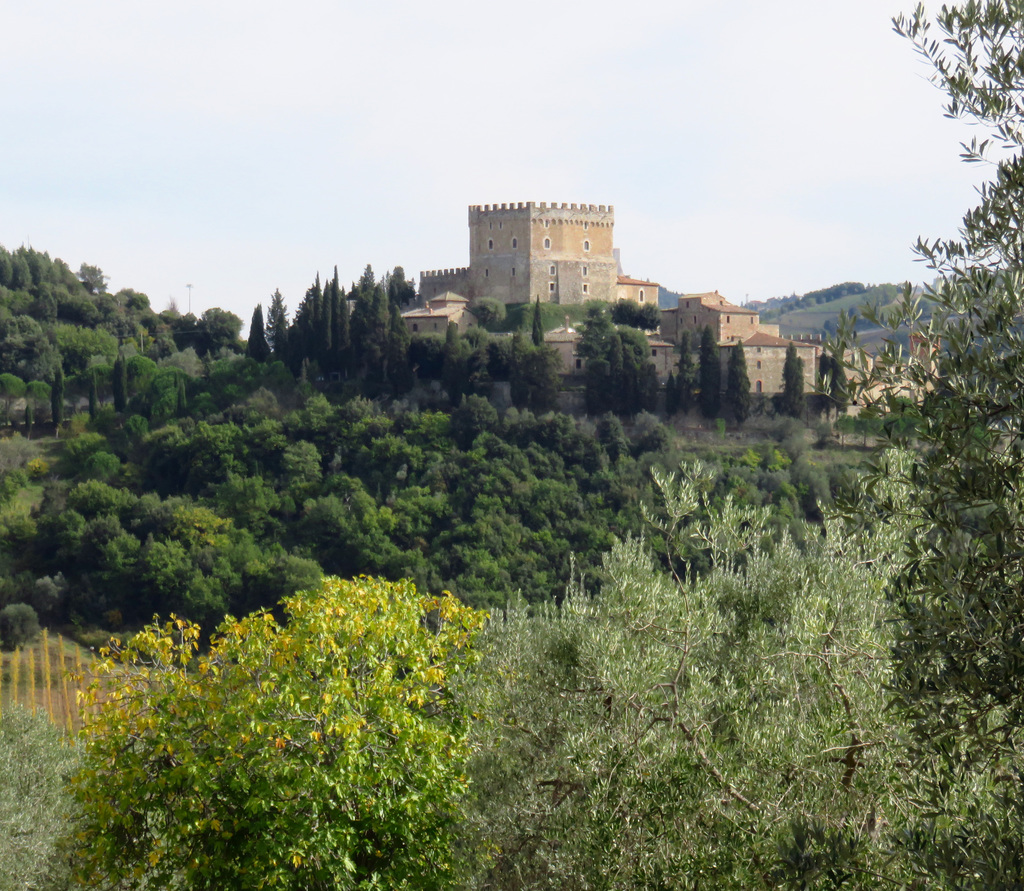 Leaving Buonconvento, we walked a quiet road, turned down a gravel drive toward a farm house, and onto a path.  Italy has a different attitude about walking and private property.  Trails and footpaths have been used for centuries.  If the walker is respectful, she is welcome to pass.

We hiked rolling hills and valleys of woodlands and harvested fields of grain and sunflowers on hiking paths, gravel roads, and country lanes encountering very few cars and no other hikers.  In the distance, we could see our destination, Montalcino, high on a hilltop.  As we approached, the landscape shifted to vineyards of the recently harvested and famous Brunello wines.  Climbing 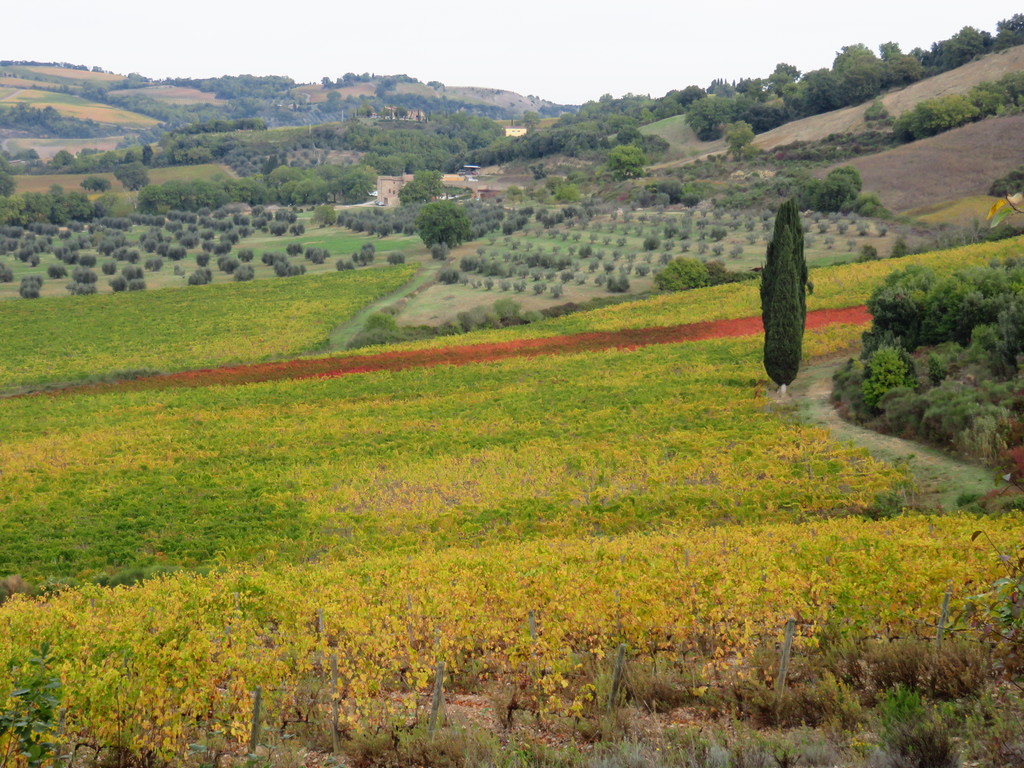 through the outskirts of town, it dawned on us that because we were hiking to hill towns, each day would end with an ascent.

Our cheerful innkeeper greeted us with glasses of prosecco and a sunlit room overlooking the main square.  In the busy season, rooms need to be booked weeks in advance.  In late October, we arranged for our inns usually a day in advance using booking.com or Airbnb.

As we left Montalcino, we enjoyed the best views of the city’s castle, grand church, and bell tower.  The trail quickly plunges into a dense forest, winding along a woodland path, crossing streams crashing down steep gullies.  It is amazing how much of South Tuscany is still forested.

Emerging from the woods, the countryside changes from harvested grain fields to vineyards.  Hike along a gravel road under a canopy of oaks for several miles and then along the crest of top land through beautiful vineyards and rolling hills.  The trail becomes steep and rugged as it descends into Starcia Valley.

The beautiful Romanesque abbey of Sant’Antimo comes into view surrounded by olive orchards and vineyards turning bright red and yellow.  After stopping to tour the church and to rest, we walked 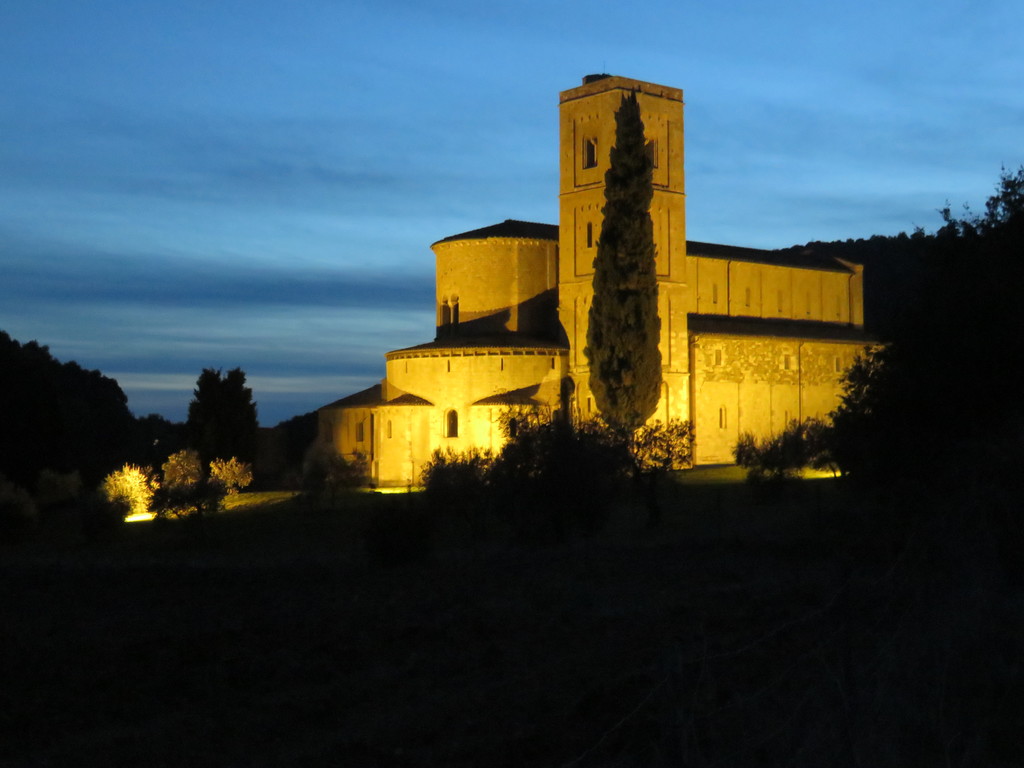 another kilometer into Castlenuovo del’Abate and to a wonderful agriturismo, La Palazzetta (palazzettafanti.it).  Agriturismos are country farms that offer lodging and dining.  The family that owns La Palazzetta is a delight.  For four generations, they have worked this land.

We toured the wine production facilities with daughter, Tea.  Then we met the rest of the family who were pressing olive oil, and we tasted the freshest virgin olive oil of our lives.

That evening, we strolled back to Sant’Antimo.  Founded in 1118 as a Benedictine community, it is now run by a French Cistercian order.  Sitting in the ancient church, we were transported to another realm by the sonorous Gregorian chants of five monks.  Then we dined at a village trattoria on ravioli with truffles, boar stew, caprese salad, and very local wine.

Our hosts convinced us that we must stay another day and return to Mantalcino for the annual medieval festival, and the family patriarch, Flavio, drove us back to town.

The festival culminated in an archery contest.  Four teams, dressed in the colors of their district competed fiercely.  Whittled down to two teams, they kept shooting from greater distances and tying.  Tension mounted.  Finally, the last archer fired his last shot and missed.  The crowd erupted with cheers and tears.

Workers were already in the orchards when we set out the next morning, shaking branches, the ripe olives falling into nets below.  Ascending a gravel road, we reached top land and hiked rolling hills of vineyards.  Monte Amiata dominates the skyline, and castles crown smaller peaks. CAI signs and posted maps mark the route.  The trail descends sharply through woodland over rugged terrain to River d’Orcia.  It passes the castle hamlet, Ripa d’Orcia and enters the spa town, Bagno Vignoni.  Built around a central square with an ancient steaming pool, the waters of Bagno Vignoni have attracted visitors since Etruscan times.

We strolled through town to the Posta Marcucci Hotel (postamarcucci.it).  Famous for its pools, it perches on a cliff overlooking the d’Orcia valley.  The hotel is the converted renaissance summer house of Pius II.  Steaming waters from 1,000 meters underground bubble up to springs that feed the large pools.  After a wonderful day of hiking, we luxuriated in the baths, sauna, steam room, and hot pools. 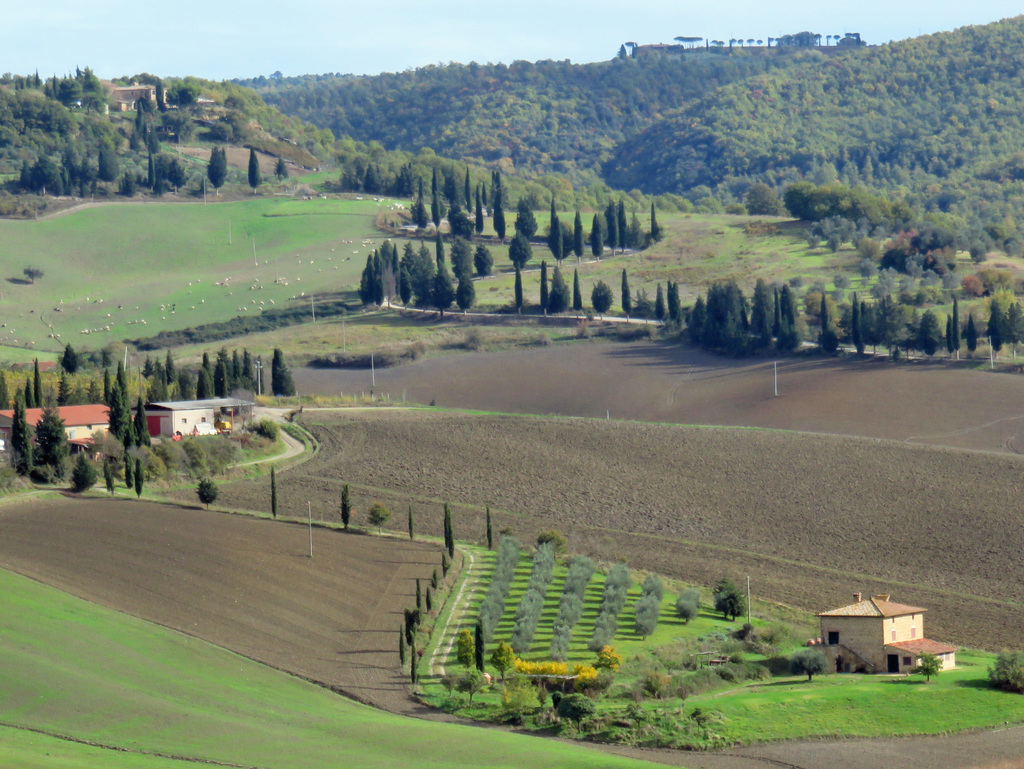 The trail to Pienza follows a route established during the Renaissance.  On gravel roads, farm tracks, and footpaths, we hiked through rolling hills of spent grain fields past old and newer farms and villas.

The hill top, walled city of Pienza beckons for miles in the distance.  Of course, approaching the city requires a long ascent.  We stopped for a rest at Pieve di Corsignano, a small Romanesque church built in the 11th century, its entry carved with dancers and dragons. 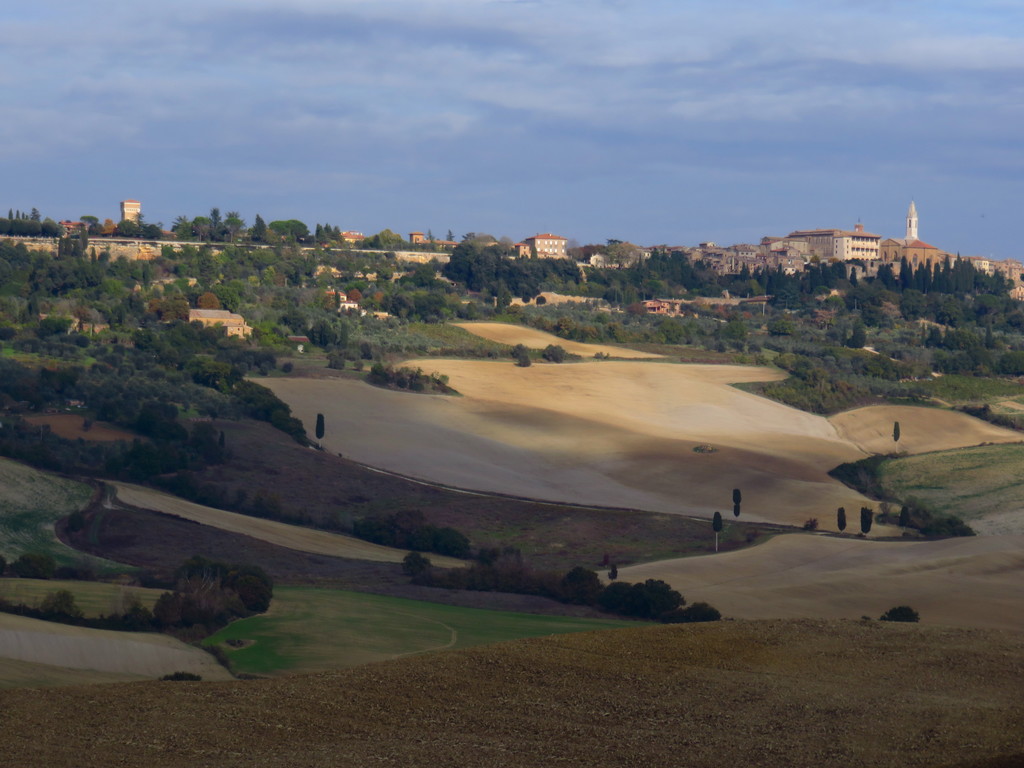 Pienza is the birth place of Pius II, and he attempted to transform it into a Renaissance utopia.  From 1459-62, palaces, the cathedral, and the central district of town were constructed, but Pius died and the project was never completed.

The central district has changed little, and it is a favorite site for movie settings.  With only a few minor changes, the made-for-TV movie “Masters of Florence” was being shot when we visited.  We joined the film crew for an evening of wine and stories in a tavern on the main square that felt like it had been serving locals and pilgrims for centuries.

We stopped at a cheese shop on our way out of Pienza, sampling some of the famous pecorinos 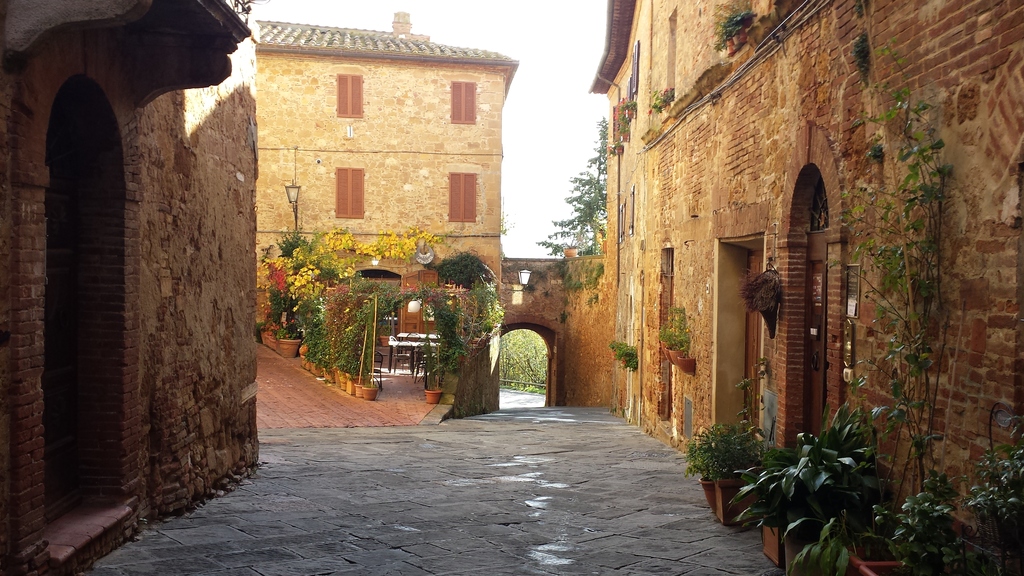 and other sheep cheeses before settling on two to carry us through our last day on the Tuscan trails.  Leaving through the S.E. portal of the city wall, the route descends a gravel road into a fertile valley.  It climbs to the crest, and views unfold of the most beautiful valleys dotted with farm houses surrounded by vineyards and lanes lined with tall cypress trees.

Turning onto a small farm path, it started to rain.  Out came the rain jackets, pants, and pack 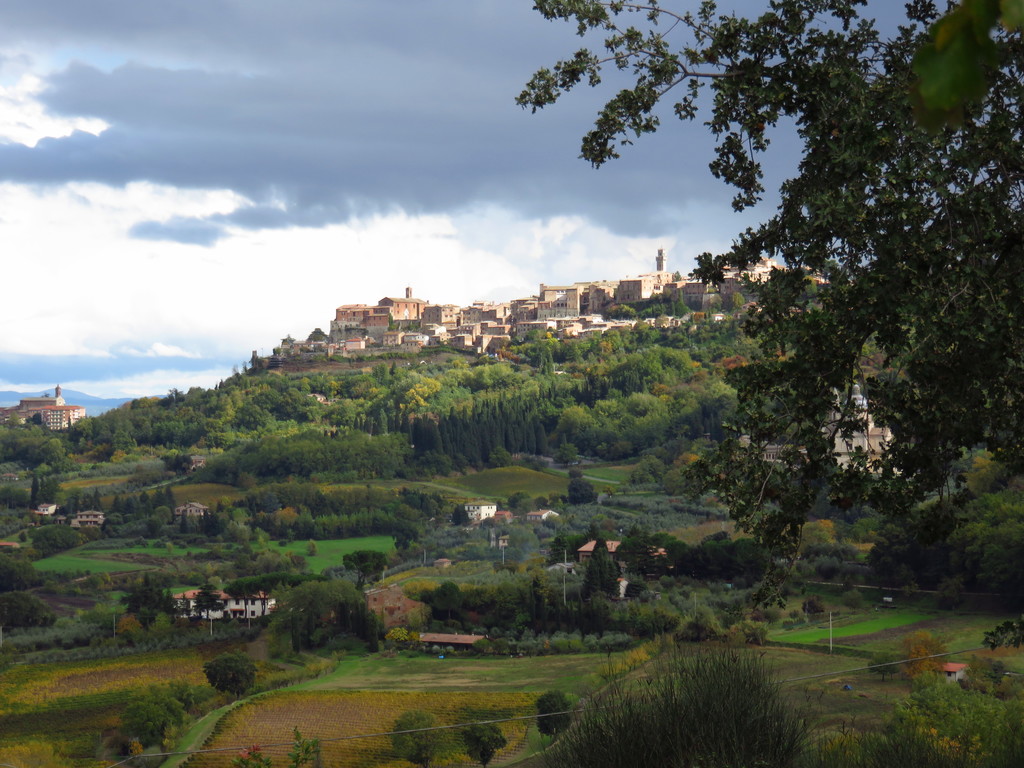 covers.  Then the skies opened, and it began to pour.  What joy to hike through Tuscan farmland and forest in the sweet autumn rain.  The skies cleared as we hiked through vineyards of Vino Nobile di Montepulciano.

The city came into view, and the sun broke through.  High on a hill, surrounded by storm clouds, the magnificent city glowed. 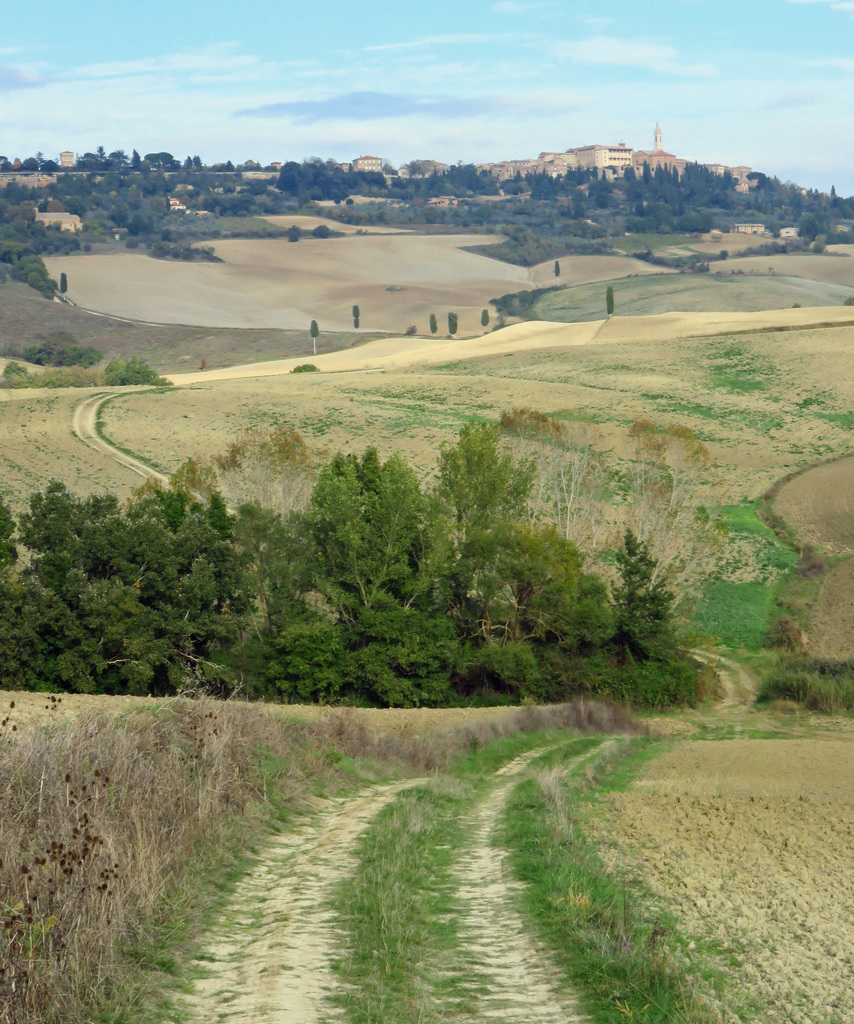 Yes, there is great pleasure in driving through Tuscany.  It might take only 30 minutes to drive to the next pretty town compared to five hours on foot.  But, I can think of no better way to have a deep experience of this rich and ancient country than hiking through Tuscany from hill town to hill town.